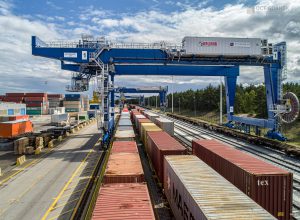 DCT Gdańsk (“DCT”), one of Europe’s largest rail-based container terminals, has completed its rail expansion with an annual rail capacity of 750,000 TEUs. The new investment opens diverse growth opportunities in landlocked markets and provides a more economic and greener alternative for DCT’s customers.

The rail terminal expansion which started in 2018 and was completed in 2021, lengthened the tracks from 618 to 750 metres. Additionally, the railway siding was extended from 4 to 7 tracks. Furthermore, fully electrified RMG rail cranes were purchased, and an OCR camera system for recording trains and containers has been put into operation. This has allowed DCT to increase its rail capacity to 750,000 TEUs.

Customers will be able to generate significant cost savings by using the shorter rail route between DCT Gdańsk and Central Europe, compared to other ports in Southern or Western Europe. The terminal operator will work with the industry to develop intermodal services to/from Poland’s landlocked neighbouring countries and regions, such as Czechia, Slovakia, Western Ukraine and Belarus.

“We are directly represented in the Czech and Slovakian markets, which allows our southern neighbours to benefit from DCT’s forwarding capabilities. Through competitive delivery times and large-scale rail connections, we guarantee lower carbon emissions per container compared to other European ports. Our experience and range of operations give inland customers a better, cheaper and greener alternative for moving their goods,” continues Charles Baker.

The opening of the rail terminal expansion is an essential step in the development of DCT. In addition to the expansion, the entry gates to DCT have been fully automated with OCR cameras. Finally, the number of state-of-the-art quay cranes on Terminal 2 have been increased to 8, the storage yard area has been expanded, and additional equipment purchased to service them: 5 electric-Rubber Tyre Gantry yard cranes.

Since becoming operational in 2007, DCT has built two terminals, Terminal 1 and Terminal 2, with a total annual capacity of 3 million TEUs. DCT was also the first terminal with direct calls from Asia to the Baltic Sea. Today, it is the only Polish and Baltic destination for the largest vessels globally, on routes from China, Korea and other Asian countries.