Three new electrically powered Rail-Mounted Gantries (RMG cranes) dedicated for DCT’s railway siding have commenced operations. The cranes were purchased as a part of our T2b expansion program and are now fully operational, enabling DCT to take another step towards increasing productivity, efficiency and handling capacity for our rail customers.

The elements of the RMG cranes arrived by ship from China in July 2019. The huge parts of the new handling equipment were then transported to the assembly site. At the same time work commenced on creating new rails for the cranes to operate on – a complex task when the railhead had to remain fully operational. Now after passing successful tests, they are ready to get to work and start handling trains at DCT’s rail siding.

The RMG cranes are 47 m long, 20 m high and 28 m wide and are designed to work on rails, being electrically powered they have lower emissions than the Rubber-Tyred gantries they replace. Not only bigger and more efficient, they are also faster with a maximum travel speed of 150 m per minute. 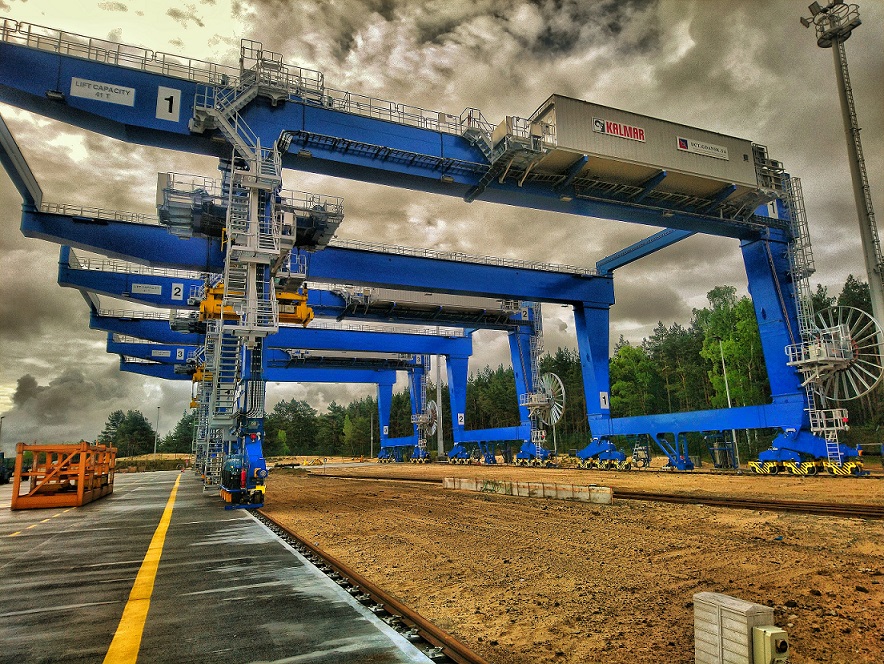 To illustrate, the size of the RMG crane is the length of eight 20-foot containers placed end to end and the height of eight such containers stacked on top of one another.

An additional feature of the RMG cranes is that they can horizontally rotate a container a full 360 degrees and safely operate 24 hours a day in all weather conditions including wind speeds of 90 km/h.

The new rails and RMG cranes are the first step in the rail upgrades of the T2b program. Next DCT will increase the number of tracks for 4 to 7 and increase the length of each siding to 750m so that DCT will eventually have 5.25km of sidings, more than doubling our rail capacity. The RMG cranes will also be equipped with automatic container number reading systems to increase the efficiency, reliability but above all the safety of handling trains.

The addition of these new RMG cranes with such parameters means DCT attaining even higher standards of service for our customers, and the completion of the next stage in capacity growth at DCT railway siding.

“Investment in rail to improve efficiency and capacity expansion are extremely important components of development at DCT Gdansk. We are very excited that shortly we will commence the expansion of our rail siding, which will eventually more than double our rail handling capacity to beyond one million TEU. The first crucial step is completed – converting the railhead to be operated by electrical RMG cranes. Next the sidings will be extended to 750 m in length and the number of tracks increased from four to seven. This project takes careful planning as we are completing it whilst keeping the railhead open for operations.” – says Cameron Thorpe, CEO of DCT Gdansk.

The rail component of the T2B program is on-going and due for completion at the end of 2021. These investments have also aligned with the Port Authority investing in an additional rail track to DCT, doubling capacity as well as building a dual-carriageway access with a bridge over the rail lines.

“We believe that the investments in rail being made by DCT Gdansk are needed for the development of the whole country. Despite the economic slowdown, still 35% of all container gate traffic at the port of Gdansk are moved by rail. In DCT, the first four months of 2020, not only did the amount of cargo handled by the railways increase, but also the share of rail increased. 35% is a very good result, but we and our business partners see even bigger potential in rail transport” – concludes Dominik Landa, Commercial Director of DCT Gdansk

About the T2b program:

The T2b program is the next stage of DCT’s dynamic development plan; T2b is the continuation of the already completed T2 project – a new berth with 5 state-of-the-art STS cranes and additional yards with 16 eRTG cranes. The project was completed in 2016 and doubled DCT Gdansk’s capacity to 3 million TEU per year.

In 2018 DCT Gdansk terminal initiated T2b program, which is to be completed by 2021; Status of T2b program components –

At the berth of our T2 terminal we have completed the addition of three new Super-Post Panamax Quay Cranes to a total of eight, all capable of operating 25-wide vessels and further enhancing our class-leading berth productivity levels.

In the yard we have completed an expansion area and added 5 highly efficient electrical RTGs as well as increasing our refrigerated container capacity.

For the gate we have completely rebuilt a new road and terminal entry and installed an OCR system. The introduction of the OCR system on our gates improves the safety of both external drivers and DCT employees as well as facilitating a more efficient and speedier turnaround time and ultimately increasing overall gate capacity. Previously external drivers would have to get out of their vehicles to present documentation prior to entry to the terminal. Now the process is seamless, and the driver doesn’t have to leave his vehicle. When combined with the Vehicle Booking System introduced the year before, it means that trucks no-longer need to wait outside the terminal before entry, reducing secondary carbon emissions.

To this end we have already converted the railhead to be operated by three new electrical RMG cranes, which are now fully operational. We have prepared rail infrastructure to run OCR system to register trains and containers. Next the sidings will be extended to 750 m in length and the number of tracks increased from four to seven.

About DCT Gdansk – the Northern Gateway for the Fastest Growing Region in Europe:

DCT does not just serve Poland but is also one of the most efficient ways to serve the Baltic Sea market via transshipment and is also the most cost-effective way to serve the hinterland markets of the Czech Republic, Slovakia, Belarus and Western Ukraine.

In 2019 DCT Gdansk handled over 2.0m TEU (20-foot equivalent unit), with direct calls by the largest ships afloat. DCT Gdansk is the only terminal in the Baltic Sea capable of handling ships of this size.