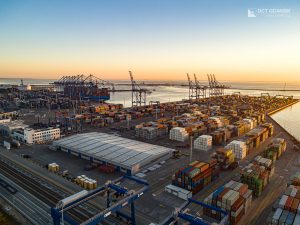 Above 2.1 million TEUs were handled in 2021 by DCT Gdańsk (“DCT”), an increase of around 5%, making it a record year for the largest container terminal in the Baltic Sea. And this despite the challenges faced by the ports and logistics industry during the ongoing COVID-19 pandemic.

DCT reached the result of 2 million TEUs handled in December 2019, just before the outbreak of the coronavirus pandemic. It thus became the first terminal in the Baltic Sea to cross the 2 million TEUs handled mark in a single year. In 2020, due to supply chain disruptions, the result fell slightly below 2 million (1.91 million TEUs), but a rebound was already evident by the end of April 2020, and in autumn 2020 volumes returned to 2019 levels.

Charles Baker, CEO of DCT, says: “Despite the challenges of the COVID-19 pandemic causing turmoil in global logistics and the supply chain, we handled over 2,092,432 million TEUs in 2021. The achievement testifies to the confidence and trust our clients have in DCT Gdańsk, coupled with DCT’s high quality services and its excellent location. The result once again shows that we are a true Baltic transport hub and gateway to Central and Eastern Europe.”

In July 2021, the Port of Gdańsk announced that DCT Gdańsk will build a third deep-water terminal, Baltic Hub 3, which when completed will increase DCT’s handling capacity by 1.5 million TEUs to 4.5 million TEUs per year. The investment, valued at EUR 450 million (approx. PLN 2 billion), will see the construction of a quay (located to the east of the existing T1 quay) with a length of 717 metres, a depth of 18 metres and a 36-hectare site to open in 2024.

“Thanks to this investment we will be able to steadily improve our performance, which we are very pleased about. In addition, we have completed the expansion of the rail siding with three additional tracks – DCT now has seven tracks of 750 metres each. We will continually invest in the technological development of our terminal,” adds Charles Baker.

DCT is the only deep-water terminal on the Baltic Sea with a berth depth of 17 meters, enabling it to receive the largest containers in the world. The terminal contributed towards Port of Gdańsk’s first place ranking of container ports in the Baltic Sea in the first half of 2021.