On September 18, 2020, the Port of Gdańsk Authority launched a tender procedure to select the lessees for a new port area that will be created within the boundaries of the Port in the Gdańsk Bay. On July 23, 2021, the tender committee officially announced the lease had been awarded to DCT Gdańsk S.A.

DCT Gdańsk is the largest container terminal on the Baltic Sea. Since the start of its operations in 2007, two deep-water quays (T1 and T2 – launched in 2007 and 2016 respectively) have been built with a total capacity of 3 million Twenty-Foot Equivalent Units (TEUs).

From the terminal’s beginnings to becoming one of the 15 largest container terminals in Europe in 2020 – this significant milestone will be the next step in DCT Gdańsk’s history.

With the construction of the new terminal, known as “Baltic Hub 3”, a third deep-water quay located at the new port area will be created, increasing the handling capacity of DCT Gdańsk by 1.5 million TEUs, to 4.5 million TEUs. The investment is worth Euro 450 million, and the third deep-water quay will be 717-metre-long with a depth of 18.0m and 36 hectares of yard will be built.

The Baltic Hub 3 project also involves the purchase of 7 quay cranes that are able to handle the world’s largest vessels, and 20 semi-automated Rail Mounted Gantry cranes for the container yard, which will be remotely operated by operators located in ergonomically-designed workspaces. This will allow for a safer, efficient, modern and more comfortable working environment 365 days of the year.

The construction is planned to start in 2Q2022 and Baltic Hub 3 is scheduled to be operational by mid-2024.

When completed, DCT Gdańsk will be among the largest container terminals in Europe in terms of handling capacity and be able to continue serving and supporting the fast-growing Polish economy, the Central and Eastern European (CEE) and the Baltic countries.

“Over the last five years, we have placed great emphasis on improving the access infrastructure to Polish seaports, renovating, and building new quays, and deepening fairways. Baltic Hub 3 in Gdańsk is a perfect result of what hard work and efforts can bring. Today, the Port of Gdansk can handle the largest container ships in the world. Thanks to the expansion of the DCT terminal, the Port of Gdansk will maintain its leading position among the ports in the Baltic Sea. Investments such as Baltic Hub 3 strengthen the position of the Polish economy. The third deep-water quay will be 717-metre-long with a depth of 18.0m and 36 hectares of yard will be built, able to handle an additional 1.5 million TEU per year. The investment is worth approximately 2 billion PLN. This terminal is the heart of the port, and its development is not only development of the port itself, but also of its hinterland,” says Marek Gróbarczyk, Deputy Minister of Infrastructure.

“The offer, followed by the choice of such a conscious investor as DCT from the PSA group, i.e., one of the world’s largest container terminal operators, proves the enormous potential of the Port of Gdańsk and the Polish economy. This is the result of nearly two years of intense teamwork, which in the first place worked on amendments to the Act on Sea Ports and Harbors, so that it would be possible to lease land that will only be created as a result of loading, then on changing the Company’s statute, and finally on developing a very complicated, transparent procedure. It worked, and thanks to such investments, the Port of Gdańsk will get to the top league of European ports. Not only are we the largest Polish port, but today we are becoming the Super Port of Gdańsk, which Poland can be proud of. We prove that Poland is a country that can successfully compete on the logistics and transport market with the largest ports in Europe. This is another great success and another result of our hard work. We prove that it is worth taking advantage of the opportunity offered by the Port of Gdańsk. Thanks to the construction of the Baltic Hub, the port was, is and will be the commercial window of Poland to the world,” says Łukasz Greinke, President of the Port of Gdańsk.

“The construction of the third quay of our Baltic Hub Terminal marks the opening of a new era in container handling on the Baltic Sea. DCT Gdańsk is a true 21st century terminal, and the Baltic Hub Terminal 3 development will bring the latest low-carbon technology which any European port would be proud of. Even the concrete used for construction will have a reduced carbon impact. Baltic Hub Terminal 3 will greatly enhance our service offerings to our customers and is a significant boost to attracting new services or shipping alliances, as well as supporting the growth of Poland and surrounding economies,” says Charles Baker, CEO of DCT Gdańsk.

“With the construction of Baltic Hub Terminal 3, Poland can continue to compete with western European ports such as Hamburg and Rotterdam. Adding a third quay will allow the terminal to serve not only the Polish market, but also the entire Baltic region and Poland’s land-locked neighbours. Historically, when we talked about major ports in North Range, it was always Hamburg – Le Havre Range. DCT Gdańsk, growing rapidly, has extended that range to Gdańsk, Poland, and the Baltic,” says Charles Baker.

As Maersk’s East Europe Managing Director Zsolt Katona pointed out, Gdańsk is an important part of Maersk’s network with clear value proposition to the growing market of CEE and Russia.

“In January 2010, Maersk and DCT started the revolutionary direct service connecting the Far East and Gdańsk. Since then, we have witnessed the strong growth of the terminal, and today DCT has become Maersk’s partner in creating E2E solutions to the customers. With BH3, we are very happy to see DCT continuing to invest in future capabilities and actively addressing the supplier chain bottlenecks,” concludes Zsolt Katona.

The tender procedure, announced by the Port of Gdańsk Authority in September last year, was a kind of market “Check” for examining the investment potential of the Port – in particular in terms of the waters where further development of deep-water terminals is planned.

DCT was chosen in a non-discriminatory, competitive procedure run by the Port of Gdańsk Authority to lease the area which will be reclaimed by DCT and where the new Baltic Hub 3 container terminal will be built, located east of the existing T1 berth. The development is expected to bring investment into the region of 2 billion PLN (about euro 450 million), all financed solely by DCT’s own funds and financing from external lenders.

The Port of Gdańsk Authority and DCT Gdańsk emphasise that the investment will be carried out with respect for the surrounding environment and the local community.

The new terminal will be reclaimed entirely on the water with its development adjacent to existing T1, thus continuing the growth out to sea, away from the beach. The same approach was utilised for DCT Gdansk’s construction of T1. DCT Gdańsk and the Port Authority of Gdańsk are responsible developers, keenly aware of the environment and the local communities where we operate and where many of our employees and friends live. As such, all appropriate measures will be taken to protect the environment and marine life and habitats in the area of Baltic Hub 3; including for example, no development of Stogi beach, which will continue to be accessible to visitors.

DCT employs over 1000 staff, of which more than 50% live in Gdańsk and the surrounding districts. The terminal has a direct and visible impact on the Regional and Polish economies – it generates over 12 billion PLN a year in VAT, excise and customs duties for the Polish state budget. . Aside from the Baltic Hub 3 project, DCT Gdańsk continues other major investment programmes, including the extension of the railway siding (expanding from 4 to 7 tracks – each 750 m long).

The terminal is owned by PSA International (40%), the Polish Development Fund (30%) and IFM Global Infrastructure Fund advised by IFM Investors (30 proc.). PSA International is a leading port group and trusted partner to cargo stakeholders. With flagship operations in Singapore and Antwerp, PSA’s global network encompasses over 50 locations in 26 countries around the world. The Polish Development Fund (PFR) is a financial group which offers instruments supporting the development of companies, local governments and individuals, and invests in sustainable social development and national economic growth. IFM Investors is a global institutional funds manager with US$118 billion under its management as of 31 March 2021.

About the Port of Gdańsk:

The Port of Gdańsk is the fastest growing European port of the last decade. Today it ranks 18th in the ranking of European ports. At the beginning of 2021, it was promoted to the group of the three largest ports in the Baltic Sea. After the first quarter of 2021, it confirmed its high position, taking the first place in the Baltic Sea in container handling. Annually, over 50 million tons of goods are handled at the port’s quays. The Port of Gdańsk covers an area of ​​over 790 hectares, where over a hundred companies with various business profiles conduct their businesses, of which over 27 carry out their transhipments by sea. Those businesses cover various industries: petrochemical, energy, agri-food and construction. Port of Gdańsk Authority was established in 1998 as a commercial company and operates based on the Act on Sea Ports and Harbours and the Code of Commercial Companies. The company’s shareholders include: The State Treasury, the Gdańsk County and eligible employees. The activities of the Port of Gdańsk Authority include, among others: property and port infrastructure management, port development planning, construction, expansion, maintenance, and modernization of port infrastructure. The Port of Gdańsk Authority is a member of many national and international organisations. It cooperates with, among others with: ESPO European Sea Ports Organization – whose main goal is to influence the maritime policy of the European Union; Cruise Baltic – an organisation popularizing the Baltic Sea region among tourists, shipowners and tour operators; The Polish Chamber of Maritime Commerce – which integrates communities operating in the field of maritime economy and represents them to institutions as well as state and local administration. 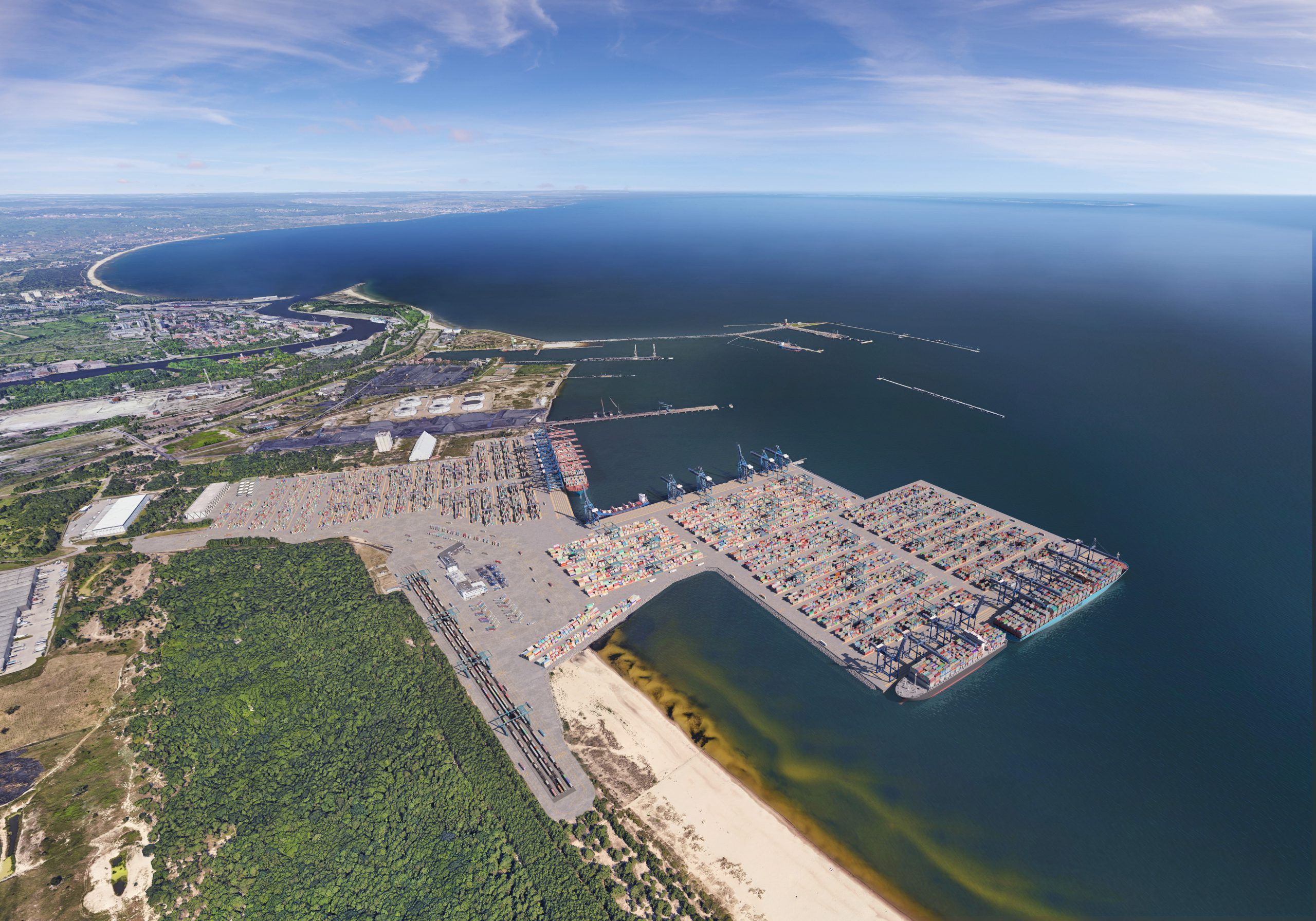